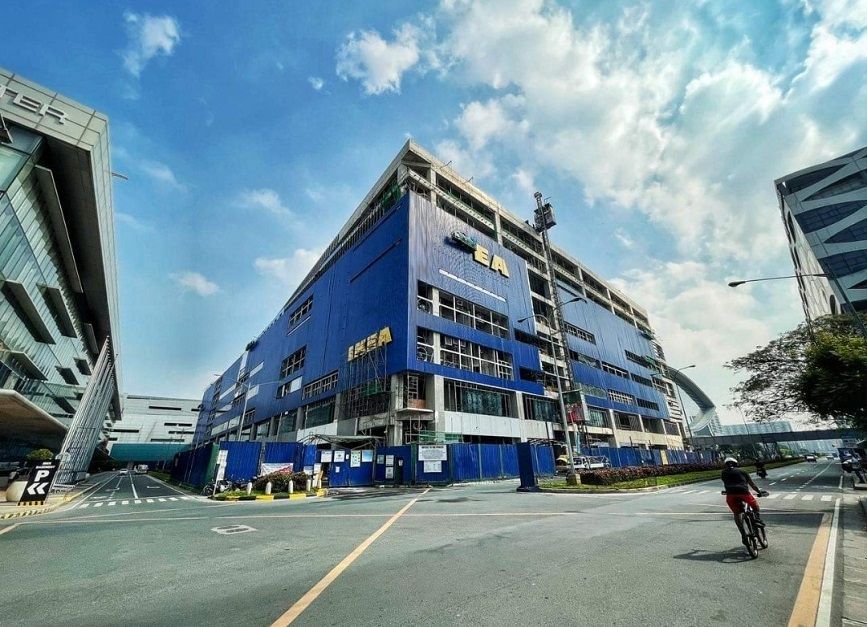 IKEA will shortly be opening its first store in the Philippines and Dortek are extremely proud to be playing our part in the fitting out of, what will, the world’s largest IKEA store. IKEA are the world’s biggest furniture retailer, and this new store is located in the Mall of Asia in the Manila Bay area.

The upcoming IKEA Pasay City store will span across 65,000m2, roughly 700,000ft2, which is the equivalent of more than 150 basketball courts. The store will be split over two shopping levels and will also feature a restaurant (featuring IKEA’s world-famous Swedish meatballs), as well as a children’s playroom. The store’s size also includes space for a call centre, an e-commerce hub and a warehouse, all of which is linked with various walkways connected to the structure in the main mall. The store will stock more than 8,000 products and it is expected that in excess of 7 million people per year will visit the store.

Dortek have manufactured and will be installing 32 GRP door sets – 24 single and 8 doubles – all with GRP frames. Our GRP doors are located in the brand new, state of the art, kitchen and restaurant areas. Dortek doors were specified by the architect for this project as we had worked successfully with them on a number of IKEA store projects across Asia in Malaysia and Thailand. The exceptionally quality of our doors has been recognised along with the hygienic benefits they offer as well as the pleasing aesthetics and the low long term maintenance costs.

The GRP door sets will be installed in both food processing and preparation areas, as well as wash down areas. Dortek doors are not affected by water or cleaning chemicals – our doors will never swell, rot, warp, de-laminate or rust unlike timber or steel doors – this being a key reason for specification on this and other IKEA projects. The ultra-clean construction of our GRP doors also prevents bacteria from harbouring. Manila is the 5th IKEA project that Dortek has worked on in Asia and we are delighted to confirm that we have also supplied doors to a new IKEA store in Singapore. We have installed GRP doors in all of the IKEA stores in the UK and Ireland and also in IKEA stores in Melbourne, Canberra and Sydney.

Dortek recently completed this special project with Knight Aerospace. This Aeromedical Bio-containment Module will be the first of many designed and manufactured by Knight Aerospace. The module is designed to be loaded into various military aircraft such as the C-130 for quick response worldwide.

The Dortek design team had to work within the modules size constraints to design and manufacture doors with the following traits: 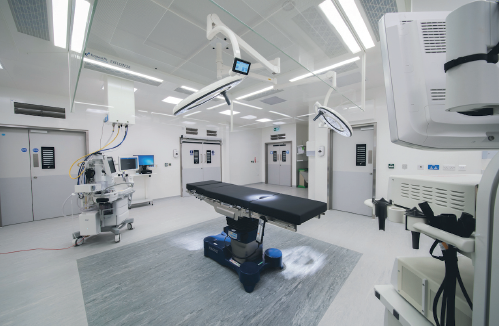 Dortek have installed timber-free hygienic doors in this modular theatre build. Once again, our doors have been chosen in conjunction with this off-site theatre build scheme at a Bedfordshire hospital in the UK. Double, leaf and a half and single doors all feature, as do our Vistatec lead and laser-proof interstitial vision panels and automations to make entering and exiting the theatre suit easy for users. 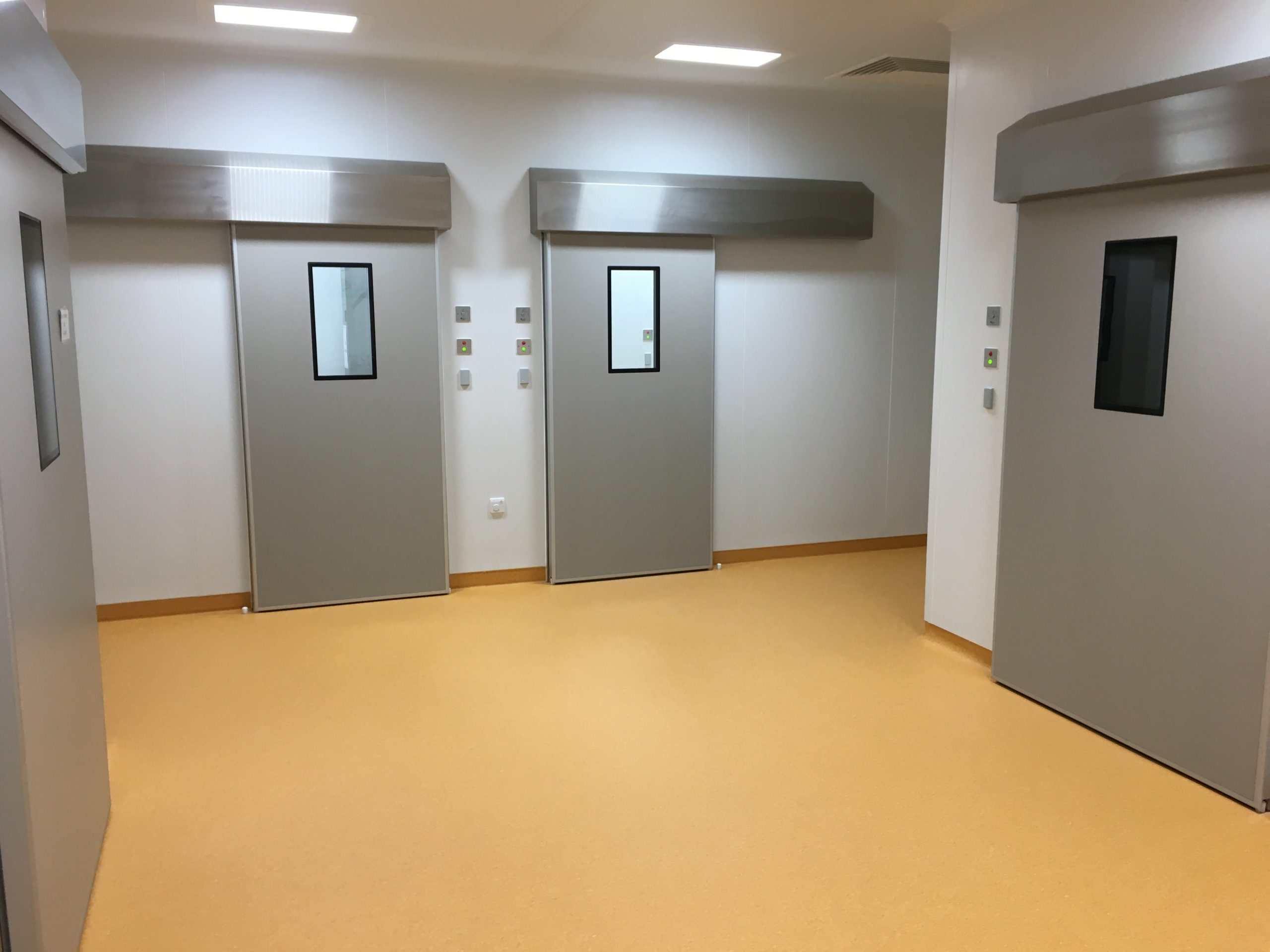 The benefits of sliding hermetic doors within a cleanroom environment.

Within Cleanrooms, it is the function of the HVAC and overpressure to provide protection against the infiltration of contaminated air. A pressure differential should be maintained between adjacent zones or rooms, with the cleanest rooms operating at the highest pressure within the facility.

The amount of air introduced into a cleanroom is tightly controlled; so is the amount of air that is taken out.  Generally, cleanroom pressurisation is achieved by taking out slightly less air than is put in.  A minimum of 5pa overpressure between clean zones is required. The extra air then leaks out under the door or through the tiny crevices or gaps that are inevitably in any cleanroom. Pressure can be increased in a room by increasing the volume entering the room or reducing the leakage amount.

Entry should be through doors that are interlocked as an airlock in a cleanroom. This is to maintain cleanroom pressure differentials and to minimise human, process and product contact with contaminated air from particles, microbial agents or chemicals. Ideally, sealing rooms with differing pressures will increase cost efficiency, reduce air loss and keep the filter load low. Hermetic doors can play a huge part in the cost, efficiency and particle control of a cleanroom.

It is important that a door, particularly if automated, has an opening and closing speed that can be easily configured according to user requirements. All personnel doors should include self-closing mechanisms, which is also a legal requirement on fire doors.

Manual or automatic hermetic sliding doors may be useful when space is an issue, or to facilitate movement between spaces of similar cleanliness class for personnel whose hands are otherwise engaged. It is important that automated doors have on board safety sensors for both door, personnel and traffic safety protection. Touchless activation of the doors should also be considered.

Cleanrooms or operating theatres that have hermetic sliding doors can give consistent and fully predictable sealing and air leakage control over long periods. Hermetic sliding doors have a frame mounted seal that, along with special indentations in the track, uses the door’s own weight to seal perfectly against the frame and also the floor. Therefore, there is no need for a threshold, meaning ease of access for beds, trollies etc. 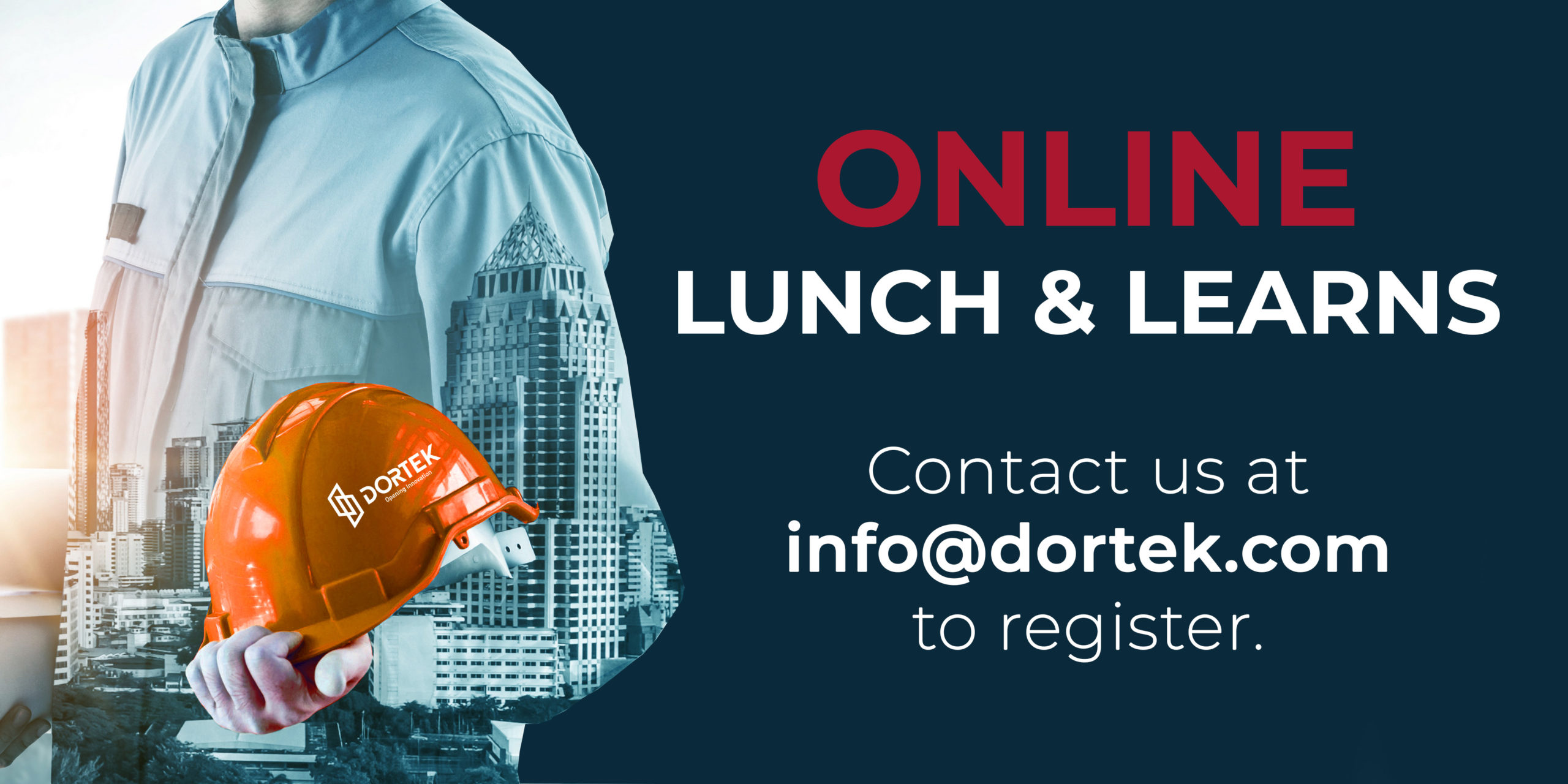 Dortek can give you a free CPD at your home desk by way of remote delivery. All you need is an email address to have the link sent to and click at the appropriate time to view the seminar with no additional software needed apart from your usual browser.

Please contact us at info@dortek.com and we’ll get straight back to you with details.

All our presentations are RIBA, AIA or RIAI accredited. 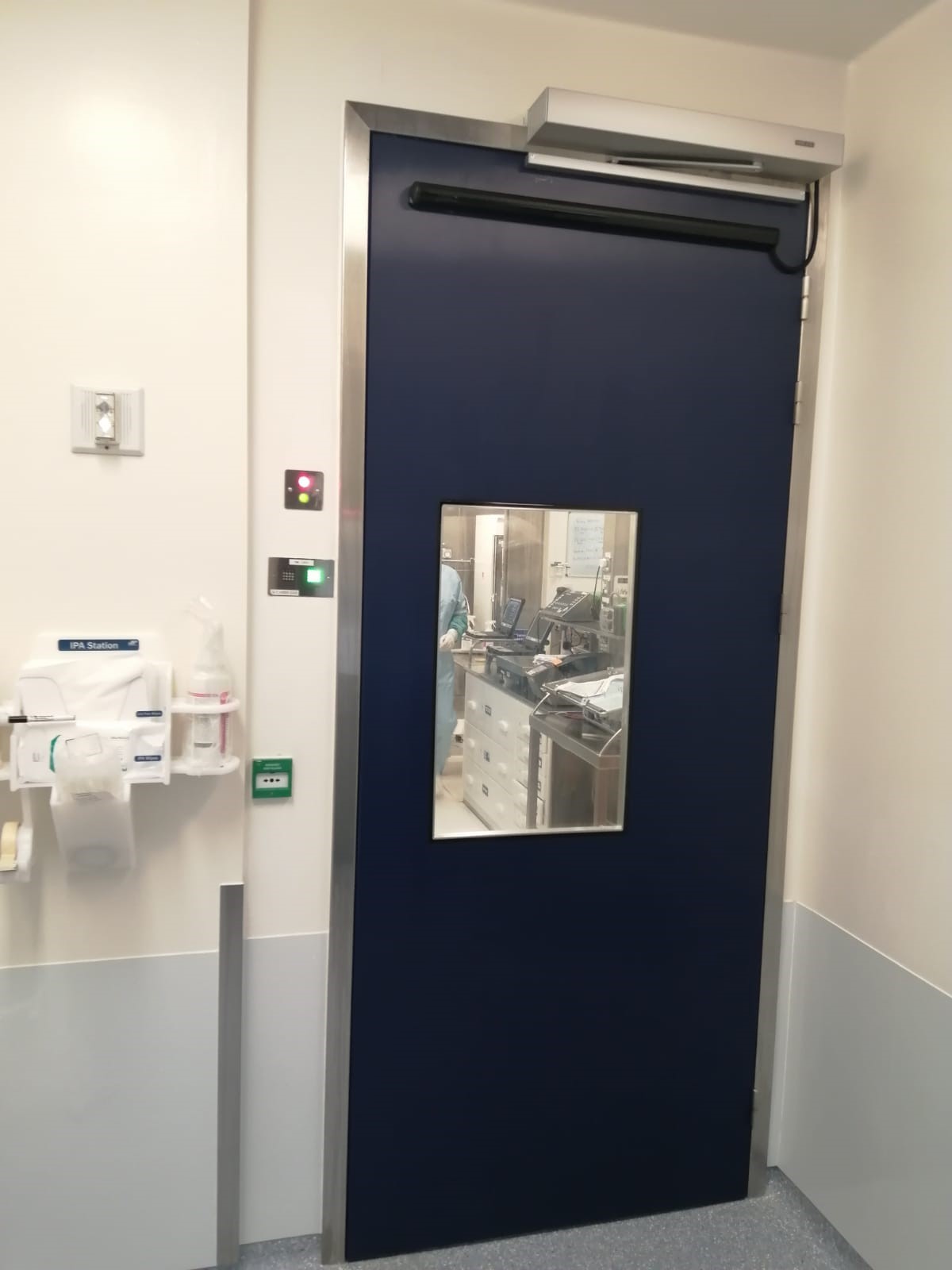 We recently installed these Cleanroom Doors inside a Biopharma facility. This door is part of an airlock to a Seed Room with 60pa pressure differential across this door. The door was automated with a system suitable to ensure that the door always closed. Magnetic locks and armature plates were inbuilt flush into the frame door stop and door blade, providing access control and ensuring the doors fully sealed to keep air loss to a minimum.